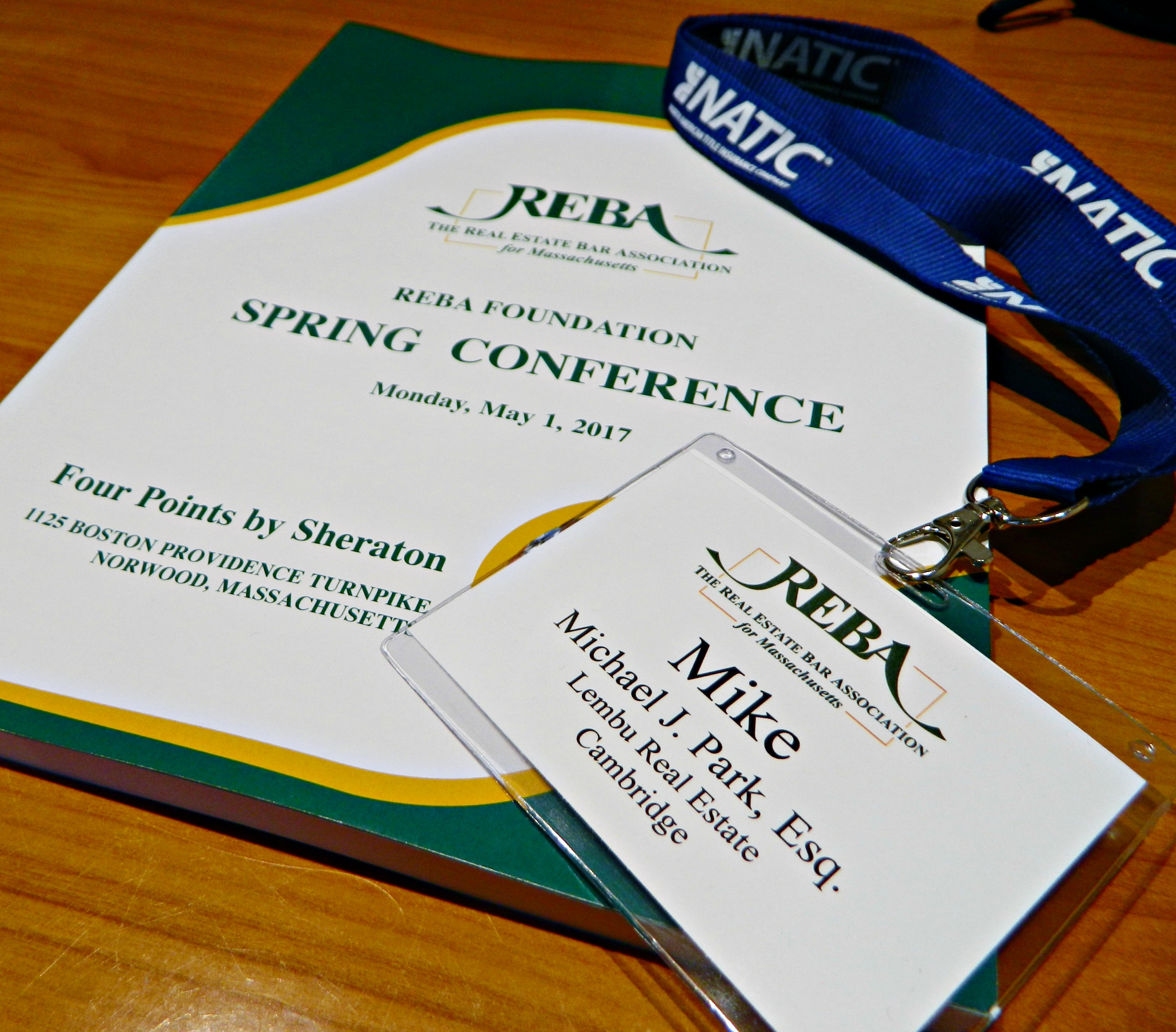 Today I went to the Real Estate Bar Association (REBA) Annual Conference. There were hundreds of attorneys there at the four points Sheraton in Norwood. The parking lot was completely packed, and as I arrived a little bit late, I ended up parking what felt like four blocks back at the end of the parking lot. It was exciting to finally make it to the conference. I’ve been looking forward to a few of the sessions. Mainly, Shining Bright: Solar Energy’s Impact on Real Estate Law session, Title to Real Estate Coming Out of Bankruptcy, and the Recent Developments in Massachusetts Case Law session.

The solar session was more technical than I expected. Even after downing a full cup of black coffee I had trouble paying attention. At least they handed out really detailed outlines of the session along with excerpts of court decisions. A lot of the talk was about the various tax rebates and incentives in place from various government bodies and how they all interact and also how their timelines are becoming obsolete. Later in the session, there was more interesting discussion about the various ownership and leasing vehicles for residential solar panels. There are some issues with the conveyancing of property that has solar panel leases in them, but it sounds like with the proper due diligence and lawyering there haven’t been too many issues. One interesting data point was that if you buy your solar panels outright, you make back your cost in 4.8 years. The various leasing and rental plans generally have a 10 to 15-year payback period where you’re not making money off of your solar energy but instead just paying off the solar panels. After the payback period, then you see more of the gains. There were some really incredible incentives that started a few years back and will be expiring soon, where people were actually getting really cheap electricity even with leases and rentals right away. But generally, it seems that unless you purchase, it’s a 10+ year process in seeing some net monetary gain over just using normal electricity. That said, many people do get satisfaction over knowing that much of their electrical usage is coming from solar even if they are paying normal rates for it and that, in many cases, is enough to pull the trigger. 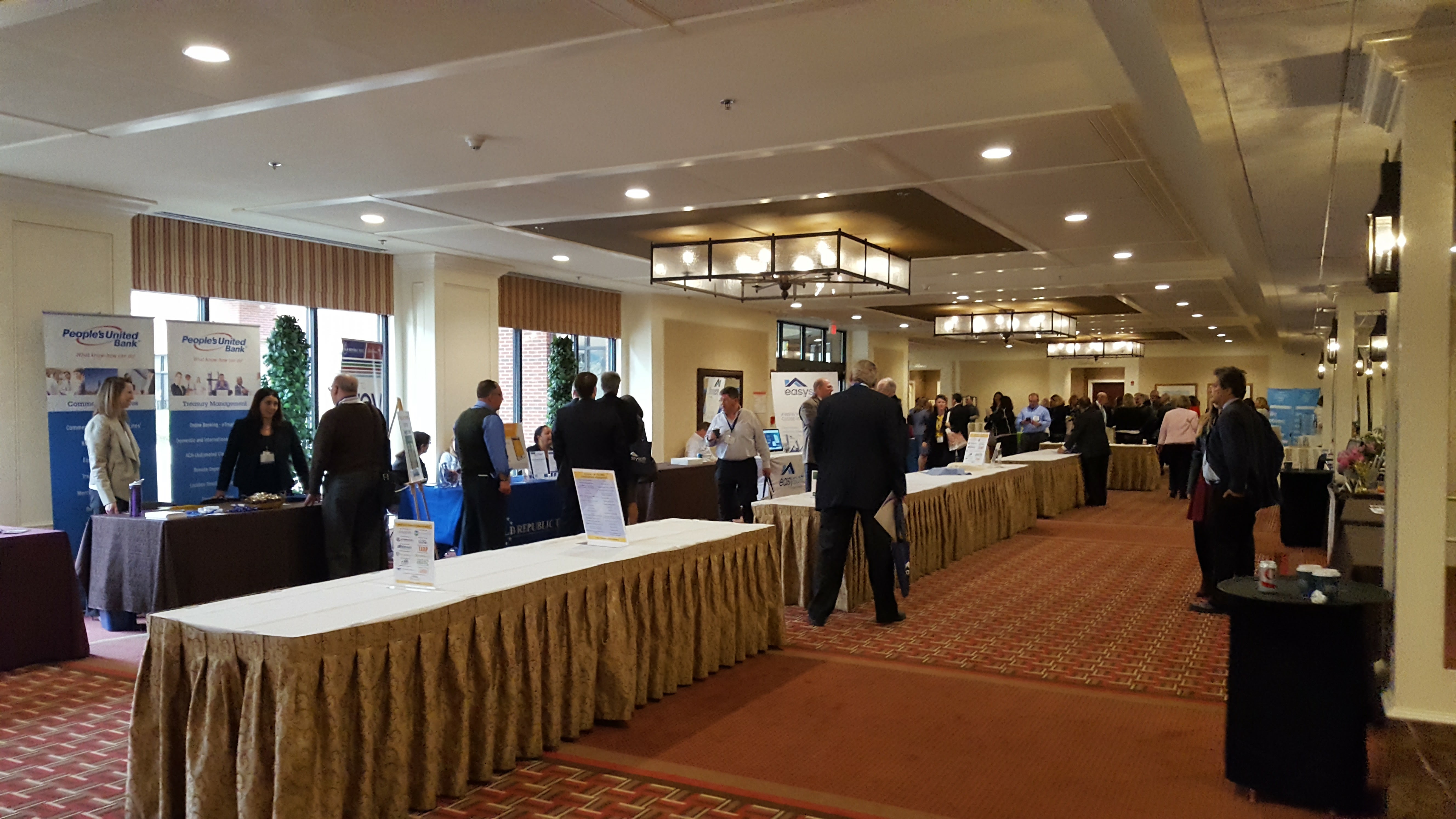 For the second session slot, the only topic that caught my interest was the Title to Real Estate Coming out of Bankruptcy session. And trust me, it was not because of the title, but it was mostly the way the notes were written in the session handouts that were distributed ahead of time. I like reading articles about the law when they reference a lot of court decisions. Decisions are a lot like a story, especially when it’s related to consumers and individuals. There’s always some type of drama involved which forced the individual into a situation that would then become a lawsuit. The law then is the vehicle and infrastructure through which individuals are protected and society is structured. Of course, this is the ideal. There are plenty of cases where the outcome is quite depressing. For example, the scenario the speakers set up for discussion was centered around a family that had a property valued at $600,000. There were three mortgages on the property, valued at $500,000, $200,000 and $150,000 dollars. In addition, there was a tax lien from the city and some type of encumbrance which I did not understand. Then, the session was about how you untangle all these debtors when dealing with a bankruptcy situation and the house is being sold. At the end of the session, the speakers went through a handful of miscellaneous and interesting scenarios, such as whether or not you can lose an easement to bankruptcy, and whether or not adverse possession can occur before or after a bankruptcy situation. 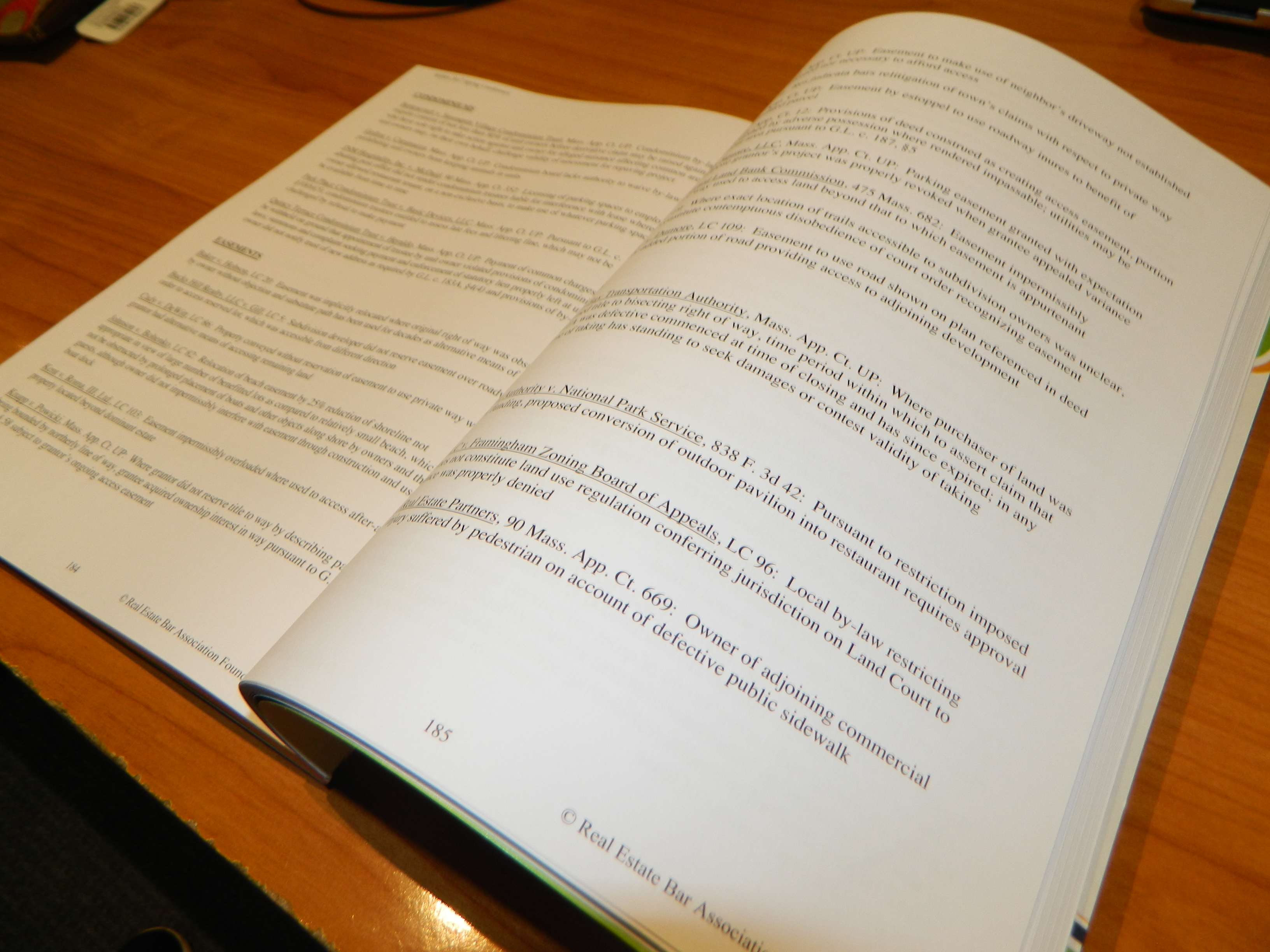 Lastly, The Recent Developments in Massachusetts Case Law was fantastic, they handed out a list of all the major Massachusetts court decisions that affected Real Estate this year. A page of decisions on residential conveyancing, two pages on residential leasing, and a whole section on easements and adverse possession. Like I said earlier when it comes to drama, there’s nothing better than court decisions, and there is nothing better than cases. Now I just have to find a paralegal to get me a copy of all the cases!